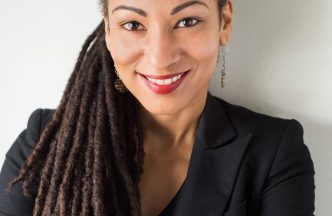 Prof. Ruha Benjamin is an Associate Professor of African American Studies at Princeton University, where she studies the social dimensions of science, technology, and medicine. She is also the founder of the JUST DATA Lab and the author of two books, People’s Science  (Stanford) and Race After Technology (Polity), and editor of Captivating Technology (Duke). She writes, teaches, and speaks widely about the relationship between knowledge and power, race and citizenship, health and justice.

From Ruha: I arrived here by way of a winding road that has snaked through South Central Los Angeles; Conway, South Carolina; Majuro, South Pacific, and Swaziland, Southern Africa. I come from many Souths, and I tend to bring this perspective, of looking at the world from its underbelly, to my analysis.

Ruha will speak on: Beyond Buzzwords: Innovation, Imagination, and Inequity in the 21st Century